What is a maid cafe?

A maid cafe is a restaurant where the waitresses “cosplay” (short for “costume play”) as maids. The cafe is the “home” they work in as a maid and they treat you as the “master” or “mistress” of the home. Read more about maid cafes in this buzzfeed article. I agree with the author’s opinion of maid cafes:

But in truth, it’s all really innocent. It’s just about being cute and have a fun time.

I’ve had some people give me weird looks when I mention this experience and they write it off as Japanese people just being strange. I highly recommend watching the Netflix documentary Tokyo Idols before deciding your opinion. I feel like the director did a great job presenting multiple perspectives for the viewer to draw their own conclusion and drew a parallel to England culture in the 70’s that might help some grasp this.

Why did I want to go?

The anime Kaichou wa Maid-sama is the main reason I wanted to go. Highly recommend watching this cute, and funny anime! This anime showed me a unique-to-Japan experience that I was eager to enjoy while traveling there.

It was Friday afternoon and I just finished lunch and touring the neighborhood with my Air BnB hosts when I came back to my apartment in the Asakusa area of Tokyo to get ready for my next adventure. I was finally going to visit a maid cafe like I had seen in Maid-sama!

I was nervous though – what was the gender ratio going to be like? What if it’s really awkward? Would the language barrier be too much?

I managed to remember the route to the Tsukuba Express (TX) line that had been pointed out to me on the tour. Sadly Asakusa doesn’t have a Japan Rail (JR) station in the neighborhood so I had to take the TX to connect to any JR line.

Luckily the TX ends at the JR Akihabara station because all the popular maid cafes are located in Akihabara. I had read in my Tokyo Lonely Planet book that @Home Cafe was a popular maid cafe because it’s known for having English speaking maids. The language barrier was a little overwhelming while traveling solo so finding a cafe that spoke a little English sounded like the best choice for me personally.

The night before I had visited Akihabara and found the cafe, which was a short 10 minute walk from the station.

I walked through the headband archway and realized that there were four floors to pick from! I assumed they functioned as four separate cafes – like when a mall has three Starbucks (that can’t just be a Seattle area mall thing, right?). I randomly picked the fifth floor for no reason and headed up the elevator.

My hands and body were starting to sweat (I was way over thinking it). In the anime, the maids all greet the customer in front of the whole restaurant. If it was like the anime, the majority of the guests there would be male and I’m not sure how or if they’ll react.

The doors open and I see the cute pink cafe. There’s a short wall in front of the elevator that you need to stand on your tip-toes to see over (well if you’re 5’8″ you do). Over the wall I could see a bright pink stage with the sign “@Home Cafe”.

The maids didn’t notice me at first. I slowly walked around the corner past the kitchen and saw a podium. As I’m approaching it, I’m starting to wonder (with relief) if this cafe doesn’t greet the guests in front of everyone like they do in the anime. All the sudden I here “Okaerinasai ohime-sama!” (Welcome back, princess!) and I freeze slightly as every male head in the restaurant turns to look at me.

I hate being the center of attention but I smiled back at the maids who had greeted me but I also thought it was funny they called me princess – so far I was loving every minute of it!

A maid showed up at the podium to greet me and show me to my seat. I began to realize she was walking me towards the cafe stage to sit me front and center. Lovely…

As I was settling into my seat, my maid/waitress came over to personally welcome me. She shyly pulled out a folded piece of paper from her pocket that had multiple English phrases printed on it. I was a little disappointed about the review at this point though because the book had made it seem like everyone there spoke enough English to not need a printed script. Not her fault the review was misleading though! This was not going to affect my experience, I just quickly adjusted my expectations since I was used to not finding many people who spoke English in Tokyo at this point. She began to read a welcome script and referred to me as princess throughout it – so fun!

She handed me the English menu and it’s actually great for a picky eater like me. I eventually ordered and when my maid brought out my drink, which was supposed to be pink, I noticed it was just soda water.

She began to explain to me, through script and miming, that we had to cast a magic spell on the flavoring by singing and dancing before adding it to the drink! Relieved that I was traveling alone and would never see the other guests again, I began to repeat after her with my hands positioned so they looked like kitty paws. She said “nyan nyan!” (sound a cat makes) while shaking the drink and then I copied her, then she said “pyon pyon!” (sound a bunny makes) with her hands over her head like bunny ears and I repeated while she shook the drink and a few more animal sounds and positions that I’ll leave to your imagination. I wish I could remember the whole spell because I was smiling and laughing the whole time – you can’t help but find the situation really cute!

I drank my magical pink soda, which was delicious, while I waited for my spaghetti. I looked around at the rest of the cafe crowd and noticed that I was not the only one who had come alone! One guy sitting by himself looked like he was in high school while the majority ranged from college age to fifties. Most men had come with just one other male friend but a few came in groups of three or four. The cafe had rules posted about no photography and how to treat the maids, which I was glad to see, but from what I heard it rarely needed to be enforced. But I noticed I was the only “princess” being served.

Fast forward super quick – as I was finishing my meal, I heard the maids welcome a new group that came in and addressed them as princesses! When I turned around I saw a small group of smiling, older ladies being seated. Then I turned and realized that two male/female couples had showed up as well! I felt better now that I wasn’t the only female mainly because it reaffirmed for me my original belief that maid cafes want all of their guests to feel welcome and it’s not just for men to enjoy.

When my maid gave me my food, she drew a little smiley face on top of the egg! It was really cute and I’d never had ketchup eggs over spaghetti but I was still happy!

Throughout the meal, all the maids stop by and make conversation with the guests. A few were able to speak English and I was able to practice my Japanese so I was glad we could talk! I couldn’t help but wonder though if some of the maids avoided me because they don’t speak English. It made me wish that I studied Japanese harder leading up to the trip!

One of the highlights of the experience was watching the male guests cast spells on their drinks with the maids as well as watch the other guests get called up to the stage to take their picture with a maid. I smiled as I noticed that guests end up putting on some sort of animal ears and I wondered what I would end up with.

Taking a photo with a maid

At the end of the meal, my maid brought over a large tri-fold  brochure type thing. She opened it and I saw maybe 20 maid head shots all lined up inside that ranged from the “premium” maids to “regular” maids. 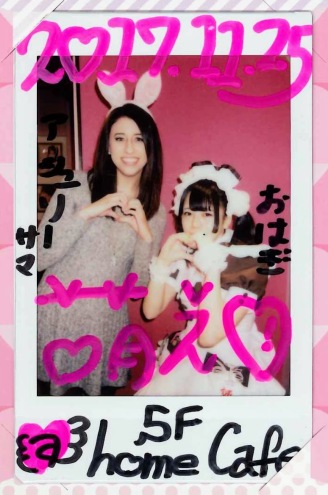 After getting over my internal moral debate of how weird this felt, I eventually just picked a maid and waited my turn while my inner feminist pouted.

I was eventually called up and I was introduced to the maid I had picked for my picture. She smiled and showed me the bin that had the various animal ears on it and I decided to go with a pair of bunny (or usagi) ears! She asked me what pose I wanted to do by demonstrating the various options, which were all adorable, but I decided on a little heart pose for our picture. My boyfriend insisted that it stay on his computer desk because as you can see, it’s adorable and I will cherish it forever!

Overall I’d recommend this experience to anyone open minded who wants to try a unique cultural experience. The food was surprisingly good (not Michelin star good by any means, but still good), the atmosphere was welcoming, and it’s definitely a unique and funny time.

Next time I go, I want to go to try an idol cafe, the robot cafe or other themed cafes to see more unique Japan experiences. I might have had more energy during my last trip to try more cafes but traveling solo is exhausting as an introvert so I hope when I go back with friends (March 2019!!), we’ll have the time and energy to check out more!

Have you ever been to a maid cafe? Share your experience below! Please leave any questions or comments since I’m happy to offer recommendations! #afkadventures

I traveled back to Japan in March 2019 and was able to visit a maid cafe again but this time with sweet Joe! Happy to report that this last visit was MUCH more enjoyable than the first trip! Our waitress/maid knew way more English, enough to carry on small conversations even. Other maids stopped by to say hello in English as well, which made it even more enjoyable.

One Reply to “Visiting my first maid cafe”